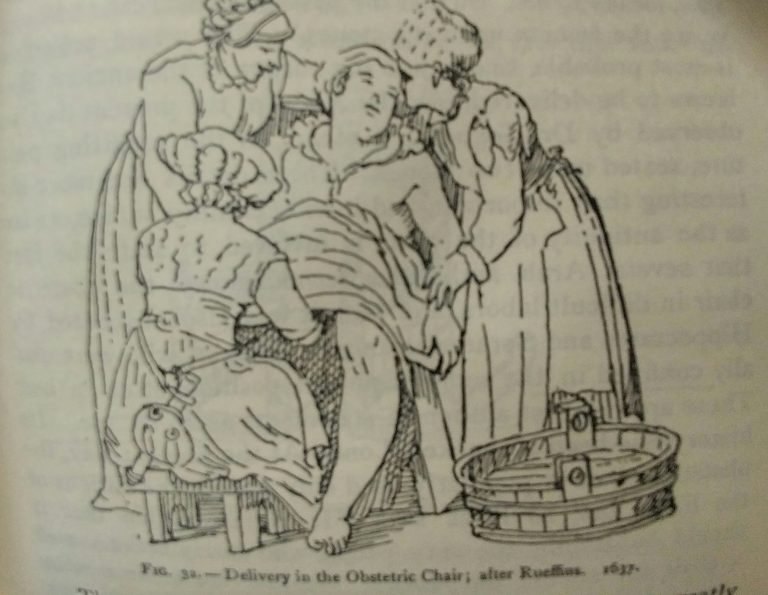 Instinct during birth has all but been driven underground in modern obstetric hospitals. Women who want to squat, crawl, kneel, hang, lean against the wall/bed, stand, sit on the toilet bowl (because a birthstool is unavailable) are prevented from doing so. It does not suit the medical attendants aka doctors and midwives for women to be in these positions. Perhaps they are afraid. Perhaps the instincts of birth are not taught at medical or midwifery school. Perhaps it is a misunderstanding of birth physiology. Perhaps it is lack of practice.

Here is what Dr G.J. Engelman, Professor of Obstetrics of the Missouri Medical College had to say about this in 1880:

“Although this (…confining a woman to a bed) is the position which is taught by the laws of modern obstetrics, so perfect in all other respects, nature does not seem to have designed that woman should in this way free herself from her burden; at least it appears very strange that instinct, the correct guide of uncivilized people, should so rarely lead them to adopt the recumbent position; and it appears strange that, notwithstanding the most careful enquiry as to the position adopted by the savages, and notwithstanding the information I have received from surgeons who have come into contact with all our Indian tribes, I have found scarcely any who assume a strictly recumbent position.”

Uncivilized people and savages seem to be associated with each other; the polar opposite being ‘white’ imperialistic civilised people who give birth in a recumbent position with some apparent difficulty in being ‘relieved of their burden’ aka give birth. There is a reference to ‘nature’ suggesting that uncivilized people are following nature by giving birth upright or any other position than lying down. A tacit nod by our observant Dr Engelman that indigenous savages were in touch with nature and its forces and mostly gave birth safely in ‘savage’ or ‘uncivilized’ ways such as standing, kneeling, squatting. Is the suggestion here that women need to discover the savage and uncivilized parts of themselves during birth? To lose their ‘civilised’ constraints and follow the path nature invites? To become fierce, swaying, mobile and empowered?

1 thought on “Instinct during Birth”