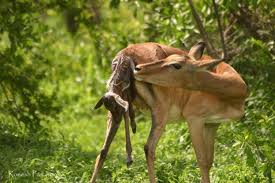 The foetus ejection reflex is a term rescued from obscurity in the work of biologist Niles Newton by Dr Michel Odent. It refers to the reflex that mice and all animals have when they give birth to their offspring in a secluded environment. Mammals need to release a flow of hormones, particularly oxytocin, to initiate and sustain

the progress of labour and birth. Oxytocin is a shy hormone and is released when a mother feels safe and secluded, away from prying eyes and disturbances. When mice in labour are placed in a glass box to give birth, their labours are inhibited and they lose more babies than when they are placed in an enclosed box covered with straw.
All animals seek some degree of seclusion and non-disturbance when they give birth to their young. In the wild, animals seek safety and seclusion. Sometimes this safety is found in the herd with other females or matriarchs. Sometimes it is found entirely alone in a private spot. In fact, when a mother is disturbed in very early labour, the foetus ejection reflex is also disturbed and may not occur. Birth among farmed animals is extremely managed and disturbed and the diminishing populations of wild animals suggests that even among animals natural birth needs to be protected fiercely.

The males of the species are usually not interested in the birth process, neither are they present at the births of their young. Dr Michel Odent believes that husbands should not be present at the births of their children, but he has conceded that it has become fashionable to bring men into the ‘delivery room’, and that if they are calm and well prepared, the mother in labour may welcome their presence.

On the one hand some men are not able to be calm and are distressed by the suffering of their wives during labour. I have found that when a husband leaves the room for various reasons (the bathroom, the cell phone, business matters, the smoke break), their wives’ labour will accelerate and often the baby will be born before the husband returns to the room. His face will lift in delight and pride that his son or daughter have made their appearance!

On the other hand, ecstatic birth practitioners prepare the mother and father to enter into a state of heightened arousal and loving interaction which helps to facilitate the birth process. Fathers who participate in the birthing process in this way often feel as if they are almost giving birth themselves. They become deeply emotional and involved and feel immensely bonded with their child. The hormone oxytocin is released during lovemaking and it therefore seems beneficial that couples engage in loving merging behaviours during labour. Gentle touch, kissing, stroking, whispers of love and physical support stimulates the release of oxytocin and endorphins, relaxing the mother and thus tempering sensations of pain. I usually suggest that fathers sit or stand behind the mother supporting her physically and do not speak. ‘Active labour’ is not the time to have a conversation! The mother may lie back and rest in the arms of her lover and husband and this loving contact is conducive to the foetus ejection reflex. So just what exactly is the foetus ejection reflex? It is a sudden awakening, a series of irresistible and uncontrollable surges of energy that empower the mother into expelling the baby from her womb. It is a spectacular release of birth hormones including adrenalin, oxytocin, endorphins, dopamine, prolactin. The mother most often needs to be upright or bent forwards in some way, needs to pull on a bar or handle(usually her husband!) with her arms. The foetus ejection reflex works best when a mother is safe from prying eyes and interventions, secluded, warm, and feeling held and loved. The birth attendant/midwife/obstetrician although present and observing needs to be calm and quiet even completely silent. This is the most difficult skill to learn of all. There is absolutely NO shouting of “PUSH”, no impatience, no examinations, just confidence that a mother’s body knows what to do. Quite often the father or mother catches the baby and bring the baby onto the mother’s abdomen.