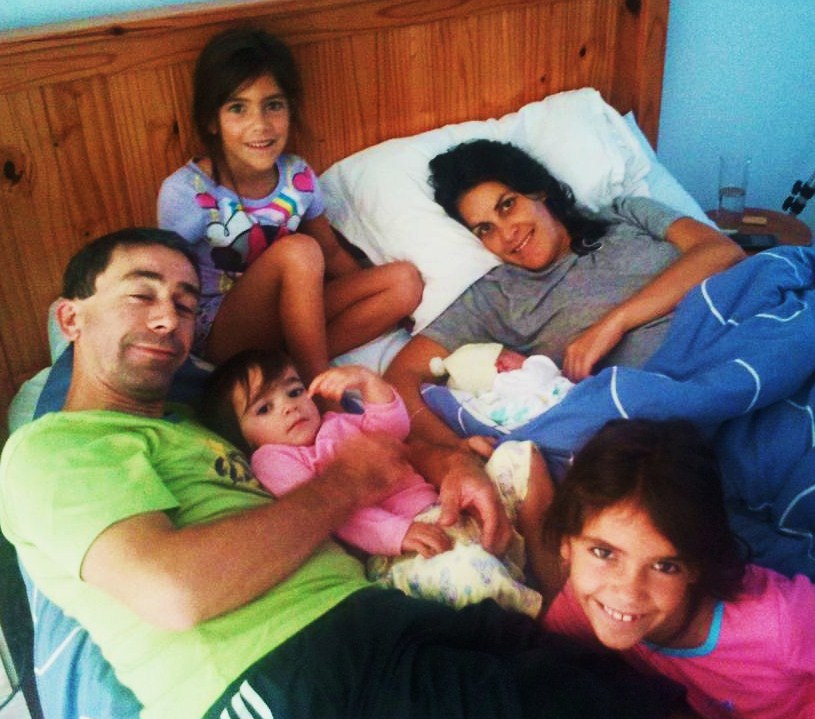 Recently I had the nail-biting experience of needing to be in two places at once. Susan Bartholomew from Nottingham Rd near Pietermaritzburg in Kwazulunatal, approximately 1500 km away from Cape Town,

threatened to go into early labour at 36 weeks, while Sharon Demore in Cape Town, for whom I had planned a quick flight to Cape Town, hung on till I arrived after driving the distance, at 41 weeks. I shall recount the story. Susan and Grant Bartholomew had come to me early in the pregnancy. Grant and his previous wife had lost twins at 28weeks several years before. They felt they had been insensitively treated by the doctor and staff involved and were determined that this time they would stay away from hospitals if possible. Susan had a calm and healthy pregnancy, despite their eco-friendly move to a smallholding in Nottingham road.

When I examined Susan at 37 weeks, I observed that  she was ready and ripe for labour, which agreed with how Susan felt, namely that labour may be imminent. Sharon and Grant needed me to be close, so no quick trip to Cape Town! I invited them out to the farm for a long walk at 38 weeks, and we spent a glorious afternoon in the veld, chatting about life and the need for a sustainable lifestyle.

One week later on the 9th of February (the day after the full mooon), Susan reported that her ‘bag of water’ was leaking and with a little help from castor oil, she was in labour by the evening. We met at Ginny and David’s Birth Centre in Hilton, where Susan settle into the warm tub of water. Susan breathed her way beautifully through the increasingly intense surges. Grant was involved every step of the way and entered the warm tub with Susan, bearing the brunt of her feelings of being overwhelmed during the transition from labour to ‘bearing down’.

Arabella slipped into the water in the wee hours of the morning and was lifted into the waiting arms of her eager parents. Grant was filled with emotion as his hope of having a child was realized and he turned to Susan and said “I love you Darling, you have fulfilled my dreams”. He had supported Susan throughout the pregnancy and labour and soon Arabella was settled on his chest while we made Susan comfortable and tucked her into bed. Arabella soon settled onto the breast and suckled sweetly while Dad Grant then called their relatives to convey the good news.

I had to prepare for the long drive to Cape Town and after a good sleep that night, set off early the following morning, a Saturday, and drove through the beautiful landscape of South Africa. I imagined how through the centuries, African people had been giving birth in their thatch roofed dwellings, now replaced by glistening tin roofs that do not insulate the home from the heat of the strong African sun. Almost akin to the hospitals and clinics where African women now give birth that, despite life-saving technology, do not insulate them from the emotional and physical trauma of medicalized childbirth.

I arrived in Cape Town exhausted after the long drive and called Sharon Demore to let her know I was close by. Sharon was 41 weeks with her fourth child and was desperately hoping to have a homebirth with me in attendance. It was Sunday evening and I was still unpacking when Sharon called at about 11h30 to say things were ‘happening’. I arrived at the home of Sharon and James just after midnight and Sharon was cheerful, very keen to get in the bath they had set up. Their three girls were fast asleep in bed and it was all systems go except that I could barely stand upright due to driving fatigue! Sharon and James’ baby birthed with ease and cries of delight emanated from the parents as they greeted him in Sharon’s arms. He was a BOY!! Their family was now complete as their three darling little girls awoke to meet and touch their new baby brother.

3 thoughts on “The Travelling Midwife: Tale of Two Cities”