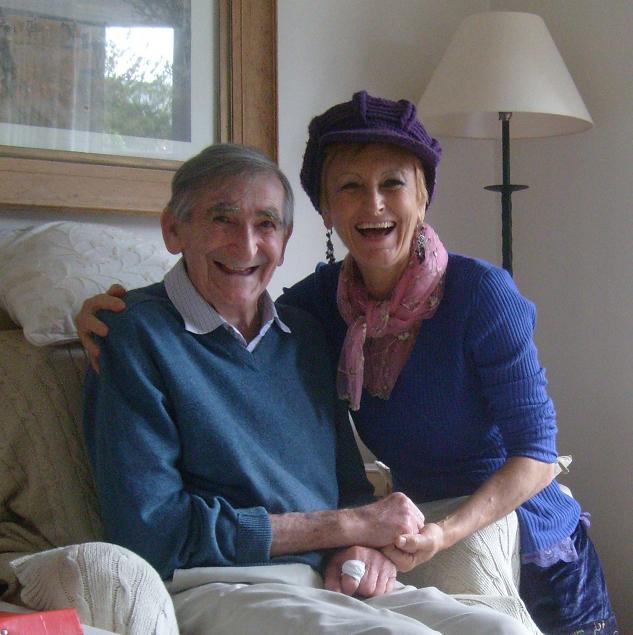 I heard him shuffle slowly slowly down the passage and imagined him pushing his walking frame inch by inch. The sound of his slippers on the tiles was like a lake lapping on the shore on a windless day. As he gradually appeared in the doorway, I rose to greet him and his face lit up into a broad toothless grin. Eyes sparkling under bushy eyebrows, he shuffled through the doorway, struggling to push the wheels of his walking frame onto the ridge of the carpet and edging close enough to the chair so he could sit down. Finally

he sat and I reached out to touch his hand and stroke his hair as his mouth rounded into an O shape, as if he was saying ‘hello’. He gurgled with delight and smiled often. When I told him he was in great shape he laughed and laughed until he coughed and spluttered. Looking into his eyes I knew he recognized me, his bright blue eyes gazing back with full comprehension and delight at my presence.

I spoke about my recent trip to the USA and apologized for having taken so long to return to revisit him in London. He tried to speak, but I could only catch a whisper and a grunt of monosyllables. I made a joke and he laughed, I told him about things and people he had known in the past and he nodded. We held hands on his lap and we interacted with heart and gusto, laughing simultaneously, our facial expressions echoing each other’s.

When I explained I had to leave again he paused and dug into his pockets as if he was searching for something. Thinking he was after a tissue, I passed him a paper towel and he took it with trembling hands, pressing corners with his thumbs. After a little while I realized he was making a paper aeroplane and he gave it to me and I threw it into the air. It floated just as a paper aeroplane should, landed on the carpet and we clapped with glee. I remembered that he had played this way with me as a little girl and shown me the first steps of origami paper folding.

My father has suffered two strokes in the last 5 years and this last stroke has robbed him of his capacity to speak, to walk unaided and to remember things that happen from day to day. Yet his long term memory is as sharp as ever and he seemed to recall things that happened 50 years ago with fervent head nodding, forward rocking and laughter. I felt so tender and motherly towards him, as if he was my child, not I his.

It struck me that I have similar kinds of interactions with newborn babies and it felt familiar: the touching, stroking, the recognition of hand movements, the smiling face, the laughing, the babbling, the shared relational field of responding and waiting for a response and affirming and listening. It felt as if the love was flowing, swirling, billowing and blending between my father and I, as it did between my baby sons and I after their births. The sadness when we drove away was that no loving now could make up for all the loving lost between us when I was a child. I could not remove nor relieve his pain, not then not now.

The joy in recognizing this tragedy is that despite the little time we had together as parent and child, the loving interaction my father gave to me I was able to pass on to my sons in more long-term ways: the holding, the eye contact, the responsive interaction, the recognition and encouragement, the playfulness and laughter, the visual affirmation, the timbre, pitch and tones of the expansive flow between us, the rich relational field.

The irony is that despite my faults and failures my sons love me more than I felt loved as a child by my parents. My now adult boys ‘see’ me for who I am and continue to interact within a loving relational field. I am humbled and grateful. I wanted in retrospect to have done so much more as a young mother, yet the little I did made a big difference to the next generation in our family. This encourages me in my work: that even small efforts to make a difference will bear fruit, that the support we give mothers, fathers and babies means a great deal and may improve the outcomes for generations to come.

8 thoughts on “The Travelling Midwife: Understanding my Father”