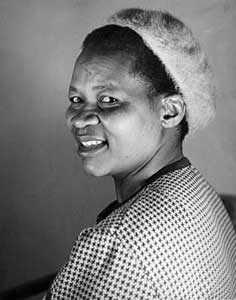 As a midwife in South Africa I am not unaware of the nuances of race and colour that have beset my profession as I explore our history in this public space. We as midwives, doulas, birth educators and professionals in South Africa, need to know what happened, so we can reflect on who we are now and collaborate in more conscious ways. Nurses and midwives have a unique history in South Africa.

Some of the history is noteworthy and some of it is worthy of exposure because of its colonial bias. One of our most famous South African midwives is the late mother of the nation Albertina Sisulu who studied to become a nurse and midwife. Sisulu started work in Johannesburg as a midwife in 1946, often walking to visit patients in townships. “You know what it means to be a midwife? You have got to carry a big suitcase full of bottles and for your lotions that you are going to use, and bowls and receivers, and we used to carry those suitcases on our heads,” she said. Unlike their white counterparts, black midwives had to travel on public transport and carry all their equipment in a suitcase.

There are few historical records of midwifery in Southern Africa prior to the arrival of Henrietta Stockdale in 1874, the colonial South African version of Florence Nightingale. Inbetween the wars for land and supremacy, women of the family or tribe were called upon to be midwives to their daughter and granddaughters as they gave birth around the fire in their ecologically sensible homes. Women worked hard, were not overweight because they walked long distances and were leading for the most part a healthy lifestyle in rural areas, as yet, pristinely African! I have heard such stories from my clients, their mothers and grandmothers. They had a knowledge of herbs and and the older women developed midwifery skills as their experience and knowledge grew. Let me not forget to say that the strongest women and babies survived while some women and babies died.

Into this milieu arrived the missionary who had been sent to convert the ‘savages’ to civilization and teach the local people artisan skills (so that they could become useful) and be educated and reformed to civilized ways. The major missionary and colonial invasion occurred throughout the 1800’s and the medical missionaries arrived alongside the religious settlers. Dr Neil MacVicar was one such doctor, who was horrified by what he saw as the primitive beliefs of the local population around Grahamstown in the Eastern Cape and he set about to educate the local population and eradicate what he saw as unscientific practices(sangoma, herbalist). Ironically, he achieved this, to a large degree, by training the first black nurses and midwives in 1908, who were, of course, not allowed to nurse white people. Black nurses and midwives, later during Apartheid, had to fight for their equal educational status with white nurses. However, Nursing and Midwifery was the only legitimate profession a black woman in South Africa could undertake, the main reason being that white nurses ‘should not’ nurse black people, especially black men. By the late 1800’s there were many missionary hospitals in South Africa, paid for predominantly by the government and segregated with sections of the hospital complex cordoned off for private or ‘white’ patronage.

Enter Henrietta Stockdale, who was a dedicated missionary in Kimberley and Bloemfontein and according to Anglican History texts, was a compassionate and competent professional in her field. Her commitment to service is illustrated by the following historical Anglican church text: “For some months she lived in the wretched homes of the poorer sort of people in the Camp; and the discomforts and hardships and actual suffering she then endured while nursing the poor women in their confinements used to make my heart ache as I listened to her tales of them. Many of the things she suffered could not be told here, but in one case the people were so poor that there was not sufficient food for her and she would have been thankful to have had even enough bread–she suffered real hunger. In all cases she had to do the whole work of the house as well as nurse the mother and care for the baby–look after the other children, cook their food, clean the place, etc., etc. After some months of this severe work, Sister Henrietta had broken down with an attack of fever, so that it had to come to an end. But she had gained a thorough knowledge of maternity work, as well as an experience which she never forgot.” (I recognize this kind of toil for mothers as a homebirth midwife!)

Although Henrietta was constrained by her colonial and religious views, she was instrumental in legalizing Nurse/Midwifery training and South Africa was the first country in the world to recognize Nurse Midwifery as a legitimate profession in 1881. Midwifery training as a stand alone profession was also recognized, but this one-two year training for midwives/accoucheurs was phased out during the 1980’s, before the dismantling of Apartheid in the 1990’s.

Black South African nurse/midwives soon organised themselves into a national body, the Bantu Nurses Association, serving in hospitals and clinics all over the country, while white nurse/midwives enjoyed exclusive membership of an exclusive association SATNA (South African Trained Nurses Association). But this situation of equal professional recognition was not to last, as Apartheid machinery began to kick in. In order to prevent black South African midwives from becoming too powerful in their own right, a law was passed in 1944, which enforced SANA membership across the country (remember the committee was exclusively white). The Apartheid progenitors then enforced the ‘Pass’ system on black South Africans in 1956. Black nurses and midwives were victimised at work and during travel between work and home.

There was a huge outcry amongst women of all races, including an organisation of white women, called the Black Sash, who campaigned in solidarity with black women to abolish the pass laws. Black nurses and midwives soon became leaders in the fight against Apartheid and, with Albertina Sisulu, led a protest march in 1956, where thousands of black women marched on parliament in Pretoria to protest against the pass system. The next fell blow to the ‘flowering of women’ in South Africa was the Nursing Act of 1957, which legalised white privilege and segregated nurses along racial lines, maintaining separate registers for each racial category, Whites, Coloreds (mixed race), Indians and Africans. It became a criminal offense for white nurses to be supervised by a nurse from another racial group, regardless of educational experience or qualification. A white nurse working on a hospital ward with an equally qualified African or Colored nurse always assumed positional authority over non-white nurses. It also meant that the training of non-white nurses and midwives, which had up until that time been equal and exemplary, became second rate. It was a major blow to the nursing and midwifery profession in South Africa as black nurses and midwives were allocated fewer resources.

There are two important points I wish to make.

Firstly, black South African nurse/midwives played a significant role in the protest against and the death of Apartheid. They have endured derogation, condescension, abuse, jail and victimization by an unjust system. Yet, black South African nurse/midwives through the centuries have shown courage, intelligence, compassion, a desire for knowledge and education and have helped to create one of the best public health systems in Africa. They have embraced scientific progress to the benefit of their communities. There is no question that western medical discoveries such as microbes and antibiotics, Anatomy and physiology of the human body, surgical skills and techniques saves the lives of women in childbirth. However, politics and childbirth appear to be joined at the hip and that is why we need to examine our history. For example, placing women on high beds and forcing them to give birth on their backs is a Western colonial custom. It is not based on research, and it is definitely not African. African women have been giving birth successfully for centuries, and while they may have rested in a supine position some of the time, many African women gave birth squatting, or standing.

The second point emerges from the first and it is this: The value of indigenous African knowledge was suppressed by African people in order to survive the colonial onslaught. Often the best way to survive an invasion is to adopt the culture of the invaders at the expense of losing one’s own compass. The culture of the oppressed adapts to that of the oppressor and local wisdom is lost or absorbed into the dominant culture. African women knew instinctively that squatting or moving during labour was the best way to give birth. This knowledge was suppressed and now African women find themselves giving birth like Queen Victoria -flat or semi reclining on their backs. African women have always known that breast was best and if a baby did not latch and suckle at the breast, the baby’s life was at risk. It has taken a century or two for this knowledge to become evidence-based medicine in the western paradigm. Western medicine is not the same as evidence or scientific research and often the two paradigms clash. Westerm medicine encouraged bottle feeding, but evidence shows that colostrum and breastmilk is the best milk for newborn babies. Western medicine ushered in clinics and hospitals which may save lives, yet exposes women in labour to a lack of privacy, staff shortages, uninformed consent and sometimes unwelcome interventions. The use of chemicals and drugs during labour in hospitals is accepted, without evidence that the long term benefits outweigh the risks.

Innate African cultural knowledge: that most women are able to give birth spontaneously, that women can do it without drugs, that women can bear the pain, that women can and should nurse their young, that local herbs and plants can be useful during labour and birth, that midwives are continually learning, that they are wise women who stand by the birthing women and give them confidence, that kindness and strong compassion are basic standards of care; Midwives must be the guardians of a birthing woman’s inner wisdom and be able to pass on their knowledge to others.

When African women come together to celebrate their strength in life, they dance, they sing, they move their bodies, they fight for each other and their right to stand as guardians of their culture. In an increasingly westernised and medicalised environment, it is time for South African midwives to acknowledge the evidence, stand together and protect the right of every woman to knowledge, freedom, dignity and compassionate care during childbirth.

This ancient African wisdom should never be lost.

5 thoughts on “Midwifery and Apartheid in South Africa”