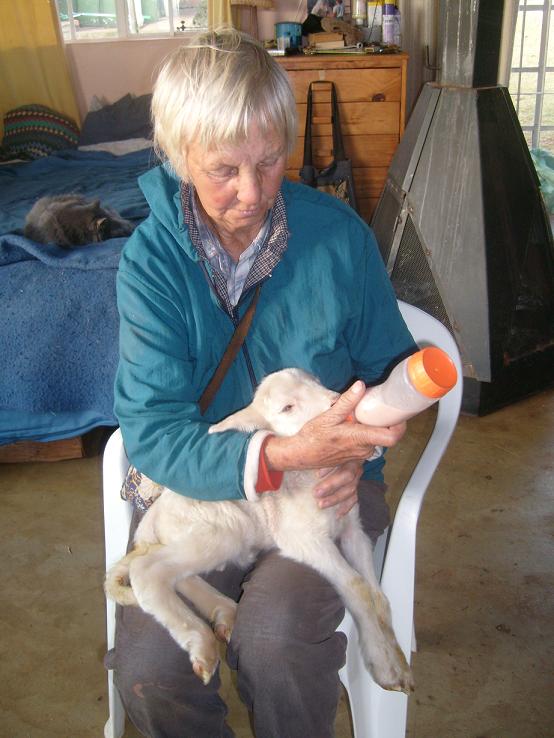 This is just a quick post to fill in the gap between our First Kwazulunatal (KZN) Birth and the Twin Birth Story , which I am busy composing.

The day after I arrived on the farm after attending the birth of the twins in Cape Town, twin lambs were born to the pet mother sheep that lives in the back garden. We checked on the lambs after about twelve hours and found them to be quite weak. They did attempt to suckle from the mother sheep’s teat, while we watched, but she was having none of it, and moved away or butted them away from her mildly swollen udder. Although she bleated for them, she was clearly uncomfortable the minute they reached for her teats or attempted to suckle. If we had left them

they would have died, so we rescued them to our kitchen and it wasn’t long before they were trotting behind our feet bleating for more!

Then we remembered that this sheep mother had also rejected her previous set of twin lambs and they had to be hand reared as well. They were very cute as baby lambs, but turned into quite obnoxious sheep, chasing my mother around the farm and butting her for food! I am not suggesting that we should have breastfed these lambs ourselves! The point is, these lambs never learnt proper sheep behaviour from THEIR mother.

We also recalled that this pet sheep mother had been given to us, on the farm, to rear from when she was a tiny lamb, and therefore separated from her mother. She had not suckled on her mother, and so had never attached to her mother as a sheep, nor had she learnt how to breastfeed. Breastfeeding is a learnt behaviour, and mammals, including human mothers, learn the technique first by breastfeeding from our mothers as infants. Secondly we learn to breastfeed our young from watching other mothers breastfeed, which this pet sheep mother had clearly not had the opportunity to do.

Separation or interference with the sensitive period after the time of birth is the root cause of this non-breastfeeding behaviour and it is much harder to execute this behaviour when a mother and infant are separated for any period of time directly after birth. Ironically the babies or lambs are born with a crawl, root and suckle reflex so they instinctually move towards the mother and her teats or nipples after a natural birth. When there is no interference during or after birth(drugs, interventions or separation), babies will seek for the teat/nipple and self latch. The mother (Sheep, human or otherwise) has to ALLOW it and support this infant behaviour. Then the lamb/human baby learns that seeking for sustenance is rewarding and will attempt the process again, until he/she has it down to a fine art. These are really important first lessons in life. As soon as these twin lambs are strong enough we will put them back with the mother, although we will still have to feed them. In the meantime, their attachment relationship with their mother is disturbed and they are bonding with humans, the fire for warmth and our dogs in the kitchen!!