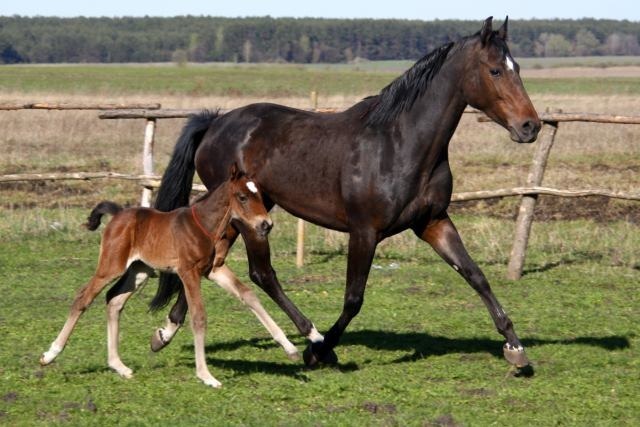 My father was a veterinary doctor in Mooi River in 1956 when he and my mother got married. The veterinary surgery was in the village, and they rented a cottage on a nearby farm, called Mount West.

My father, Sandy, when he was not in the surgery, attended routine farm visits daily, such as vaccinations or insemination of cows and horses. He was also permanently on call to attend to animals who were having trouble giving birth.

This ‘trouble’ giving birth happened 2 to 4 times a week. My mother would accompany my father, while she was pregnant with me, and assist with the parturition of pigs, horses, sheep and mostly cows. Most animals give birth without fuss and I include a link to illustrate how efficient animals are when they give birth Duna the cow giving birth. After birth, the babies stand or crawl and suckle by themselves.

My mother loved this work and was hands on, pulling on the front feet of large baby bullocks, as they were struggling to be born. The many years of managing her family’s thoroughbred stud farm, prior to her marriage, stood her in good stead. When the mares were due to foal, she would sit in the corner of the stable quietly, in the dark and be available during the birth of the foals. If needed, she would step in to assist or call for help. Each foal was valuable.

Sometimes, Sandy and my pregnant mother would be called to assist a cow that could not give birth successfully. They would administer an epidural anaesthesia to the cow. Then they would, together, perform a caesarian section. My father would slice through the muscles quite close to the hip bone. Once the calf was lifted free, my mother would hold the edges of the uterine walls together so that my father could suture them closed. Then she would continue to hold so my father could work through stitching the abdominal layers and finally the hide. Both cow and calf would survive and celebrations would be held in a warm farmhouse kitchen with a cup of tea or a tot of brandy! The placenta of a cow has many cotyledons. Sometimes cotyledons get left inside the cow after birth and my father would administer antibiotics for weeks after trying to retrieve the bits that were left behind.

My mother’s birth plans were very pragmatic. The cows managed to give birth on the farm, or in the field and she would manage to give birth at home. If she couldn’t give birth vaginally, she knew surgery would solve the problem and remove the baby and that she and baby would survive. After a bout of diarrhoea (common in early labour), my mother felt growing discomfort. My father called the midwife, Sister Du Plooy, who drove up from Pietermaritzburg to the farm and arrived at about 6pm. When the pains came, my mother walked around freely or lay down to rest in-between. She groaned loudly with each urge to bear down. The doctor had beads of sweat on his brow, she told him “I’m having the baby, not you!” I was born at about 9.30 in the evening. After the placenta was expelled, my mother asked “Where are the cotyledons?” The doctor told her that human placentas are different to bovine placentas! She was very relieved.

Babies in the womb are receptive to their maternal environment. The unborn baby is a part of what a mother does, where she goes, who she mixes with, the events that fill her with excitement or sorrow. And as the unborn baby grows, towards the end of a pregnancy, the unborn baby may recognise voices, familiar tastes, smells, and movements and patterns. Babies learn in the womb. I learnt about birth.

A Circle has been closed, I have left Cape Town, and I have returned to the place of my birth. I was born in Mooi River, Kwazulunatal, South Africa in 1958. Was my life as a midwife learnt in the womb? Last week a sweet baby boy slipped into my hands. I am home.

3 thoughts on “Giving Birth and Being Born”